A Hypothetical Map of Highbury

Penny Gay (email: penny.gay@sydney.edu.au) is Professor Emerita at the University of Sydney.  Her books include Jane Austen and the Theatre (2002), and she has made numerous contributions to collections of Austen-themed essays, including The Cambridge Companion to Jane Austen (2nd ed., 2011) and Approaches to Teaching Austen’s Mansfield Park (2014).  She also publishes extensively on Shakespeare.

THE SKETCH MAP BELOW, FIRST DEVISED in the late 1980s for teaching purposes, is based on two significant sections of Austen’s text in Emma:

Highbury, the large and populous village almost amounting to a town, to which Hartfield, in spite of its separate lawn and shrubberies and name, did really belong, afforded her no equals.  (7)

This paragraph is preceded by one in which we are told that London is “only sixteen miles off” and that Randalls is “only half a mile from” Hartfield.  Randalls “adjoins” Highbury (7).  In chapter 1 we are also told that Mr. Knightley “lived about a mile from Highbury” (9).  There is also the story of the gallant Mr. Weston meeting Emma and Miss Taylor in Broadway-lane when “‘it began to mizzle,’” and borrowing two umbrellas from Farmer Mitchell’s (12).  This is a vast amount of precise “placing” information in the novel’s opening pages, unmatched by any other of Austen’s expository chapters.  Emma’s world is clearly being created for the reader to inhabit imaginatively with her.

Harriet had business at Ford’s.—Emma thought it most prudent to go with her.  Another accidental meeting with the Martins was possible, and, in her present state, would be dangerous.

Harriet, tempted by every thing and swayed by half a word, was always very long at a purchase; and while she was still hanging over muslins and changing her mind, Emma went to the door for amusement.—Much could not be hoped from the traffic of even the busiest part of Highbury;—Mr. Perry walking hastily by, Mr. William Cox letting himself in at the office door, Mr. Cole’s carriage-horses returning from exercise, or a stray letter-boy on an obstinate mule, were the liveliest objects she could presume to expect; and when her eyes fell only on the butcher with his tray, a tidy old woman travelling homewards from shop with her full basket, two curs quarrelling over a dirty bone, and a string of dawdling children round the baker’s little bow-window eyeing the gingerbread, she knew she had no reason to complain, and was amused enough; quite enough still to stand at the door.  A mind lively and at ease, can do with seeing nothing, and can see nothing that does not answer.

She looked down the Randalls road.  The scene enlarged; two persons appeared; Mrs. Weston and her son-in-law; they were walking into Highbury;—to Hartfield of course.  They were stopping, however, in the first place at Mrs. Bates’s; whose house was a little nearer Randalls than Ford’s; and had all but knocked, when Emma caught their eye.—Immediately they crossed the road and came forward to her . . . (233)

The richness and significance of this famous passage needs little re-emphasis to readers:  it bespeaks both the liveliness and the limitations of Emma’s imagination; this, in fact, is the “world” that we hear about in the novel’s opening sentence.  The details of village life are all there to be laid out on the high street map—butcher, baker, grocer, lawyer, public house, post office.  What is of major topographic significance, however, is that, standing at the front door of Ford’s, Emma can “look down the Randalls road” (233)—which, as we already know, is half or three-quarters of a mile from Hartfield.  Mrs. Weston and Frank might turn right or left on the Highbury Broadway (as I have named it) in order to get to Hartfield; but Hartfield is close to Mr. Elton’s vicarage and the church; so I needed to place both Hartfield and the church, its parish school, vicarage, and glebe on Vicarage-lane within very easy walking distance from each other. 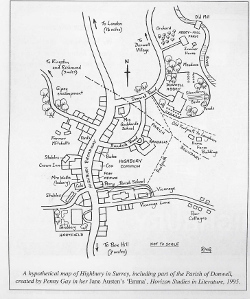 Map of Highbury.
(Click on image to see larger version.)

I placed Hartfield (and the church) on the south side of Highbury because we know that it is 7 miles from Box Hill.  Richmond-on-Thames, a real place, is 9 miles north of Highbury; Kingston-on-Thames, the market town and also a real place, would be 5 miles on the same road north of Highbury.  There is an almost direct north-south line from Kingston to Box Hill; at the mid-point sits Leatherhead, which according to family tradition was the basis of Austen’s fictional Highbury in Surrey.1  Leatherhead has a Randalls Road running north-west from the High Street, and a Kingston Road running north-north-east.  But Leatherhead is only 3 miles from Box Hill, so that would place the fictional Highbury farther north.

no possible place is at once 16 miles from London, 9 from Richmond, and 7 from Box Hill; the precision of these figures was perhaps designed to preclude the possibility of a false identification.

The topography of Highbury is given in such detail that many attempts have been made to construct a map.  I have not found it possible to do this with certainty; the indications are just not sufficient.  (521)

Exactly so!  “Highbury” exists in a fictional universe, closely parallel to Austen’s own early nineteenth-century world, and intersecting with real places (Kingston, London) as needed.  However, I want to add her nearest town, Alton in Hampshire, into the imaginative mix.  This small market town, a mere fifteen to twenty minutes’ walk from Chawton, was visited regularly by Austen for Highbury-style shopping when she was at home in Chawton.  It would have imprinted itself on her imagination as the prototype of a “large and populous village almost amounting to a town.”  It was a town, chiefly because it had a market and a magistrates’ court—neither of which Highbury has.  But if you walk down the high street of Alton today—with its eighteenth-century houses and shops still largely intact—you can easily think yourself in a bustling large village.  The seventeenth-century map of Alton shows the town probably much as it was in the early nineteenth century, before the coming of rail and the suburban expansion.  There is a Church Street running off the high street to the north-west; a mill-stream approximately where I have placed the Abbey-Mill farm; a Crown Inn at just the right spot on the high street; and a short Langham Road (no mere “path” nowadays) running just south of and parallel to the main Basingstoke east-west road.  The fascinating thing is that I sketched the hypothetical map of Highbury before I ever set foot in Alton; and yet they clearly have a very similar layout—as do many large villages in the southern half of England: a high street with branching side roads, one of which will always lead to the parish church. 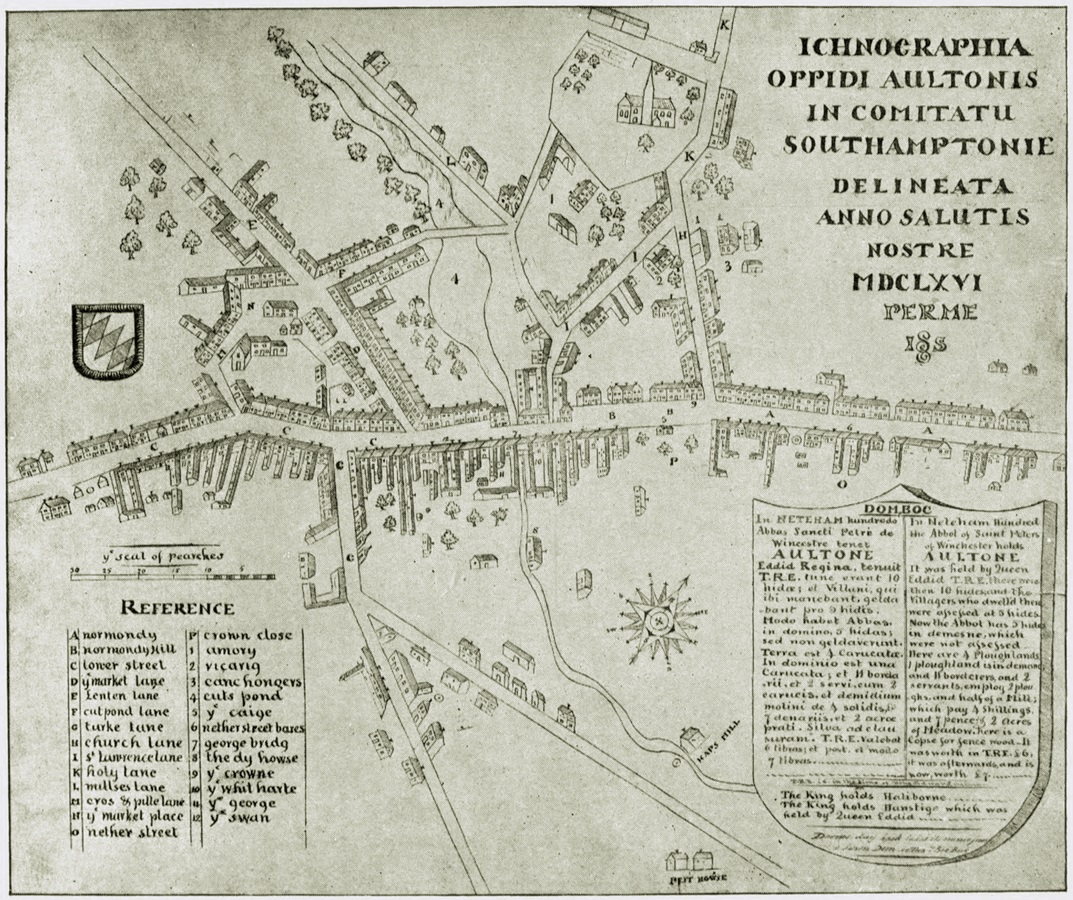 One further material question:  what population might constitute “a large and populous village almost amounting to a town” in 1814?  To answer this I went to that wonderful resource, the Victoria County Histories (published 1900 – present).  Fortunately there were national censuses in 1811 and 1821—easy enough to invent a median figure.  I checked villages and towns that I knew Austen was familiar with and came up with a figure of approximately 800-1000 people.  There are a number of people in Highbury, we are told, either known or not known to Mr. Woodhouse (who has lived there practically for ever) “by sight.”  There are “the second rate and third rate of Highbury, . . . the Mistresses and Misses of Highbury and their card-parties” (155); there are the “gentlemen and half-gentlemen of the place,” who have their whist-tables at the Crown (197); not to mention the many other small trades and businesses that help to run a prosperous village—and all the servants of houses both small and large.  Not everyone went to church every Sunday (Emma certainly doesn’t—witness her behavior after Mr. Elton’s proposal), and indeed outside of the Methodist movement, church attendance was famously lax in the early nineteenth century.  A large church built in a prosperous village in, say, the fourteenth century, could hold 800 people.  (Donwell, a separate parish, presumably has its own smaller church and village2 farther up the Donwell Road.  One wonders if Mr. Elton did duty there, or had a curate.)

Mr. Knightley is property-rich:  he owns not only Donwell and the Abbey-Mill farm; the estate also encompasses all of Highbury except Hartfield, “a sort of notch in the Donwell Abbey estate” with “inconsiderable” lands, and smaller properties such as the “little estate” of Randalls purchased by Mr. Weston (16).  Chawton, in the real world, was a similar estate, belonging to the Knight family, with its great sixteenth-century house—to my mind, the model of Donwell Abbey, admired by Emma for

the respectable size and style of the building, its suitable, becoming, characteristic situation, low and sheltered—its ample gardens stretching down to meadows washed by a stream, of which the Abbey, with all the old neglect of prospect, had scarcely a sight—and its abundance of timber in rows and avenues, which neither fashion nor extravagance had rooted up.—The house was larger than Hartfield, and totally unlike it, covering a good deal of ground, rambling and irregular, with many comfortable and one or two handsome rooms.—It was just what it ought to be, and it looked what it was.  (358)

Compare this description with that of Chawton Great House in a letter from Fanny Knight to Miss Chapman, 30 August 1807:

This is a fine large old house, built long before Queen Elizabeth I believe, & here are such a number of old irregular passages &c &c that it is very entertaining to explore them. . . . There are quantities of Trees about the house (especially Beech) which always makes a place pretty, I think.  (Austen-Leigh et al. 144)3

Clearly, my map is schematic and not to scale:  it would only confuse its purpose as an assistance to reading the novel if I had added in the “right” number of houses for the population, and represented the distances between named topographical items more accurately.  Given that both Robert Martin and Mr. Knightley have to ride through Highbury in order to get to Kingston—and be seen by the high-street denizens such as Miss Bates—I might in a re-drawing place the Kingston/Richmond road slightly farther south, perhaps closer to the Crown Inn.  A path should be indicated running from beside Ford’s to behind the Coles’ stables—an alternative route back to Hartfield when the Broadway is flooded with heavy rain (179).  I was reminded when perusing the Victoria County Histories for Hampshire and Surrey that Mr Elton’s vicarage needs a bigger glebe (of about 12-20 acres) on which he can grow fruit and vegetables and keep livestock.  He can walk “over the fields” to Donwell—a short cut, though tiring on a hot day (457).

I would like to acknowledge the excellent draftsmanship of my husband Robert Gay, who made such a clearly readable sketch map out of my ideas, contributing his own based on a tightly focused reading of the novel.

1See the summary of this argument for Leatherhead in Cronin and McMillan (533 n. 7).

2The “old servant” whom Emma visits during the painful formal visit of Harriet to the Martins, has “married and settled in Donwell”—in, not at, signifying a village, not the great house (186).

3Le Faye goes on to comment, “The older part of Chawton House was of flint and stone, dating to the first half of the sixteenth century but possibly incorporating medieval foundations, and in the middle of the seventeenth century two red-brick gabled wings had been added, necessitating extra staircases and awkward passages, as Fanny had noticed” (144).