Gillian Dow (email: gillian.dow@chawtonhouselibrary.org) is an Associate Professor in the English Department at the University of Southampton.  She is also Executive Director of Chawton House Library.  She has published widely on Jane Austen and her contemporaries and has a special interest in pan-European women writers and translation.  Her most recent collection of essays, co-edited with Jennie Batchelor, is Women’s Writing, 1660–1830: Feminisms and Futures (2017).

Kim Simpson (email: kim.simpson@chawtonhouselibrary.org) is the Chawton House Library Postdoctoral Fellow and a Lecturer in English at the University of Southampton.  She has published on Eliza Haywood and Delarivier Manley and is currently working on a monograph—The Little Arts of Amatory Fiction—alongside a long-term project on anonymity.  She is a former Visiting Fellow at Chawton House Library.

Catriona Seth is Marshal Foch Professor of French Literature at All Souls College, University of Oxford. A Fellow of the British Academy, she has published extensively on many aspects of eighteenth-century literature and culture, particularly in the period 1760-1820. She is also a former Chawton House visiting fellow, who has a special interest in French women’s writing: she is Staël’s most recent editor.

On 18 March 1817, Jane Austen laid down her pen, setting aside twelve chapters of the unfinished manuscript later titled Sanditon.  Exactly four months later, on 18 July, she died in Winchester.  Her sister, Cassandra, wrote, in a letter to their niece Fanny Knight, “her precious soul I presume to hope reposes in a far superior Mansion.  May mine one day be reunited to it” (20 July 1817).  Two hundred years have passed, and Jane Austen’s fortunes have undergone a remarkable revolution, so that although initially a little-known and provincial authoress, she is now arguably the most famous woman writer in the world.  As Gillian Dow observed in a speech to mark the unveiling of the new Jane Austen ten-pound note in July 2017, “she wrote herself into comparatively little money in life; she has written herself onto millions of pounds in death.”  Today, Austen is a global brand, and “Austenmania” shows no signs of subsiding:  her novels remain phenomenally popular, and screen adaptations, fictional prequels and sequels, and merchandise continue to proliferate in a dizzying array of ever-evolving media. 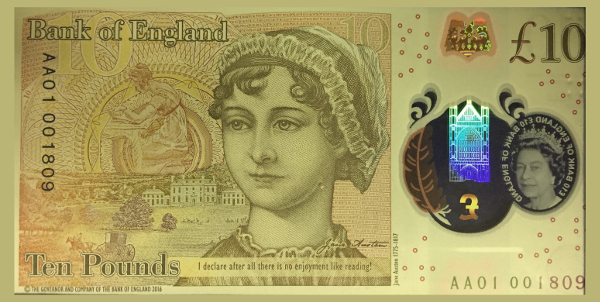 This banknote was presented to Chawton House Library by the Chief Cashier of the Bank of England, Victoria Cleland. It bears the number 1809 to mark the year that Austen moved to Chawton.

Sense of place plays a crucial role in Austen’s continuing reputation.  In a 1902 article, “Jane Austen’s Home,” which is typical of many of the early pilgrimage essays in Austen criticism, the American Josephine Tozier advises that “the traveler to England who has a day or more to spend among scenes hallowed by gentle literary memories will do well to visit the pretty little village of Chawton, whose houses clustered near the gate of Chawton Manor, in which village, for the last years of her life, Jane Austen made her home” (Tozier 400).  Indeed, although Austen died and was buried in Winchester, it was the village of Chawton in Hampshire in which she spent the most productive years of her literary career. 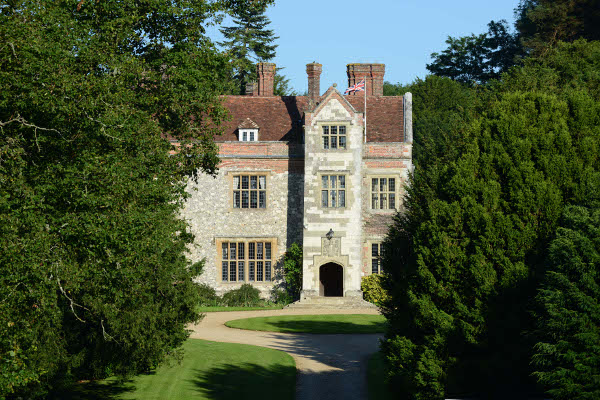 Chawton House is an Elizabethan manor house and estate once owned by Jane Austen’s brother Edward.  When he inherited the estate from the wealthy but childless Knight family, he gave Jane, her sister, and their mother a cottage in the village, where they lived from 1809.  Today, Chawton House Library is home to a unique archive of over 10,000 works by women from the period 1600–1830.  Since opening in 2003, it has championed research on women’s writing and has played host to 263 Visiting Fellows from across the world on a residential Fellowship program that ran from 2007 to 2017.  In 2017, the bicentenary of Austen’s death, there were almost ten thousand visitors to the Library.  Many of these visitors were following in Jane Austen’s footsteps by making pilgrimages to the places that Austen had known and loved in her lifetime.

Following the success of the 2016 exhibition “Emma at 200,” an online version of which appeared in Persuasions On-Line (37.1), Chawton House Library hosted two exhibitions in 2017, both aiming to contextualize Austen’s extraordinary fame and to interrogate the transience of eighteenth-century celebrity by exploring the lives and reputations of two women writers whose fame far surpassed Austen’s during their lifetimes.

The first exhibition, “Naming, Shaming, Reclaiming: The ‘Incomparable’ Eliza Haywood” (March–June), examined one of the most infamous writers of the early eighteenth century.  The first exhibition to focus solely on Haywood (1693–1756), it reconstructed her immensely productive career using rare early editions of Haywood’s work currently held in the library collections.  It elucidated the waxing and waning of her reputation, the literary networks to which she belonged, and the considerable influence she had on subsequent writers.

July 1817 saw the death of Austen and also of Germaine de Staël (1766–1817).  The second exhibition, “Fickle Fortunes: Jane Austen and Germaine de Staël” (June–September), explored how, over the two centuries since their deaths, the relative reputations of these two writers have re-aligned in ways that would have astonished their contemporaries.  In doing so, it re-established often neglected, but vital cross-channel links and correspondences between women writers at the end of the long eighteenth century.

What follows is a virtual tour of both exhibitions.  As Dow noted in the 2016 online exhibition that preceded this one, “the evocative nature of strolling through the rooms that Jane Austen knew, and which surely must have inspired her creation of the great houses of her novels” cannot be reproduced virtually.  However, looking over the items that we drew together for these two exhibitions ought still to provoke some of the vexing but important issues that these exhibitions explored.  In addition to recovering and promoting prominent European women writers of the eighteenth century to audiences perhaps unfamiliar with territories “beyond Austen,” the exhibitions aimed to situate modern notions of celebrity within their historical context, and to challenge national boundaries that often restrict our understanding of the long eighteenth century.