The Anglican Church and the clergy were an important part of Jane Austen’s life.

Her father, her brothers James and Henry, and four cousins were clergymen. She lived with her family in the parish rectory at Steventon until she was 25 years old.

The English churches listed below have ties to Jane Austen or her family. For Janeites taking an armchair tour of the churches or planning a trip to England, we offer brief summaries of each church's Austen ties as well as links to a location map and the church website. For JASNA members who would like to know how donations to Jane Austen's family churches have been used, we also note which have received a grant from JASNA to help fund projects.

Read about the Austen family churches and the church and clergy in her fiction. 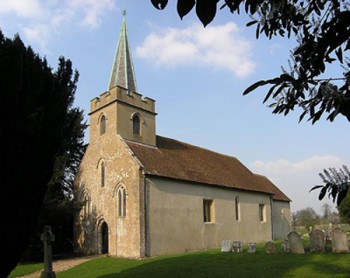 The church of St. Nicholas, Steventon, played a significant role in Jane Austen's life.  She was baptized in the church on April 5, 1776, and attended worship there for 25 years.  Her father, the Rev. George Austen, was rector of the church from 1761 until his death in 1805.  Her brother James became curate of the church in 1801 when George Austen moved to Bath and succeeded his father as rector from 1805-1819.  Her brother Henry was rector from 1820-1823, and her nephew William Knight followed as rector from 1823 to 1873, completing over 100 continuous years of Austen/Knight rectors at St. Nicholas.

In Austen's time the church did not have the tall, pointed steeple, but the yew tree in front is said to be over 900 years old and would have been very familiar to her. 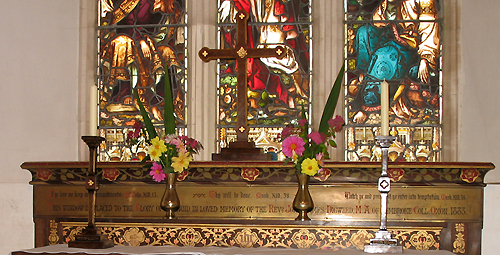 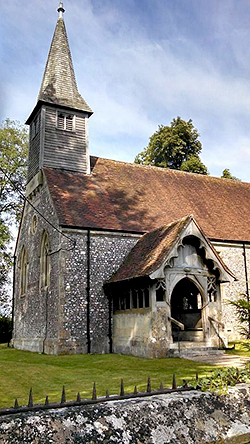 Ashe is only a mile or so from Steventon, and Jane Austen was familiar with St. Andrew's during her early life.  (The name of the church later became Holy Trinity and St. Andrew.) The Rector Rev. George Lefroy and his wife, Anne, were friends of the Austens. Mrs. Lefroy, sometimes called "Madam Lefroy," was a friend and mentor to Jane Austen. She was killed in a riding accident on Austen's 29th birthday and is buried in the churchyard at Ashe.

There has been a church in Ashe since before Domesday (1086), but the present building dates from 1878. Currently, services are held twice a month. 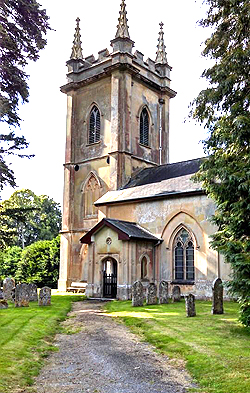 The medieval church Jane Austen would have known was replaced in 1818 with a church in the gothic style. The parish is adjacent to Austen's home parish of Steventon. Her father was Rector of Deane from 1773–1805. Jane Austen's brother James was curate from 1792-1805.

Currently, services are held only twice a month. 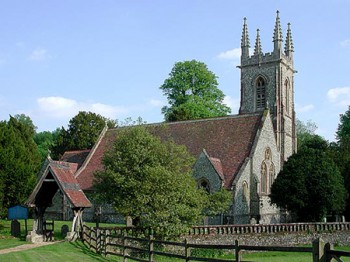 St. Nicholas Church is situated within the grounds of the great house owned during Jane Austen's lifetime by her brother Edward (now Chawton House Library). Located near the cottage in which the Austen women lived, this was their parish church.

The current church dates from the early 1870s; a fire destroyed most of the building in 1871, and very little of the medieval church that Jane Austen knew remains except the chancel and the Knight family memorials saved from the fire.

Many of the memorials in the church are for the Edward Austen Knight family and their descendants. Austen’s mother and sister are buried next to each other in the ancient churchyard, 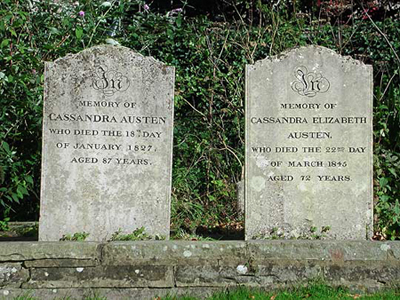 In May 1817 Jane Austen moved with her sister, Cassandra, from Chawton to Winchester to receive medical treatment.  Her health continued to fail, and she died in Winchester on July 18, 1817.  She is buried in Winchester Cathedral in the north aisle of the nave.  A memorial window overlooks the grave site, and the cathedral has created an educational display about Austen.  Visitors come from around the world to pay their respects at her grave. 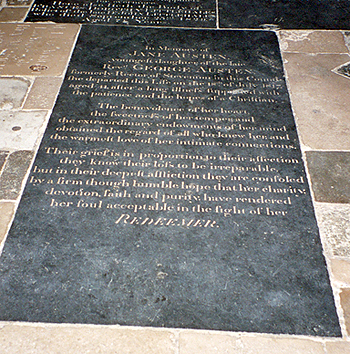 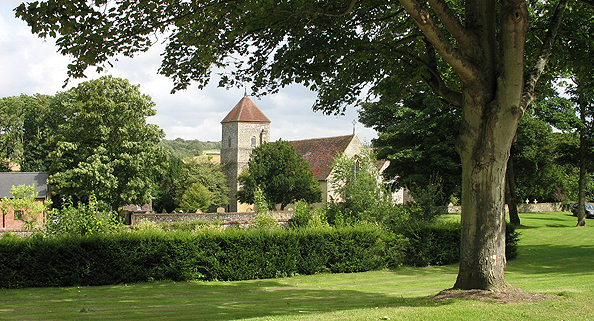 View of church, walking from the house (photo © Lynn Sherick)

St. Lawrence the Martyr is located in Godmersham, Kent, on the grounds of Godmersham Park, the estate inherited by Jane Austen's brother Edward from his adoptive parents, Thomas and Catherine Knight.  Jane Austen and her sister, Cassandra, attended the church often during their extended visits with Edward and his family.

When Jane Austen attended services in the church, she sat in the Knight Pew in the south transept. The pew was on the right and was entered by a staircase of six steps.  The entrance to the church in Jane Austen’s time was in the center of the West end, which was blocked up in 1865.

Susanna Sackree spent a lifetime at Godmersham Park as nursemaid to all of Edward Knight’s children.  Jane Austen mentions her in several letters.  A memorial plaque to Sackree located on the exterior of the church became badly eroded in the 20th century.  The text of the plaque was transcribed onto an illuminated manuscript now displayed on the north wall, funded by a gift from JASNA. 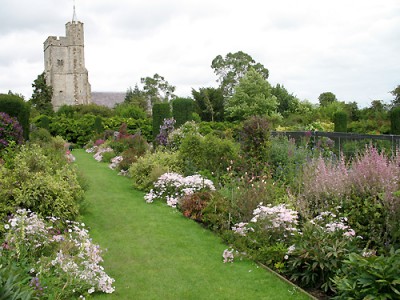 View of the church from the house garden (photo © Lynn Sherick)

Holy Cross Church was attached to Goodnestone Park, the estate of the Bridges family.  Jane Austen’s brother Edward married Elizabeth Bridges in the church in 1791.  When Jane and Cassandra paid extended visits to Edward and Elizabeth at their first home, Rowling House, on the Goodnestone estate, they worshipped at the church.

The tower and the north chancel wall are all that remain of the original Norman structure. The interior was remodeled in 1839 and is a fine example of the nineteenth century Gothic Revival style.  Holy Cross is now the village church and a favorite venue for choral performances.  It also functions two days a week as the village post office. 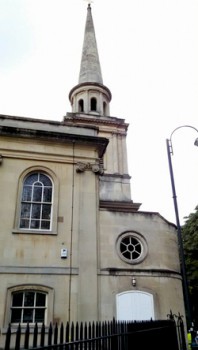 Jane Austen's parents, George and Cassandra Austen, were married in St. Swithin's Church, Walcot parish, in 1764.  In 1805, while the family was living in Bath, George Austen died and was buried in the church crypt.  His gravestone was later moved to the churchyard.

There has been a church on this site since 971; the foundations of the Saxon church are beneath the crypt.  The original church was torn down, and the existing one completed in 1777, thirteen years before Jane Austen moved to Bath with her parents and sister.  Designed by John Palmer, who also designed the Lansdown Crescent, the church is in the classic Georgian style. 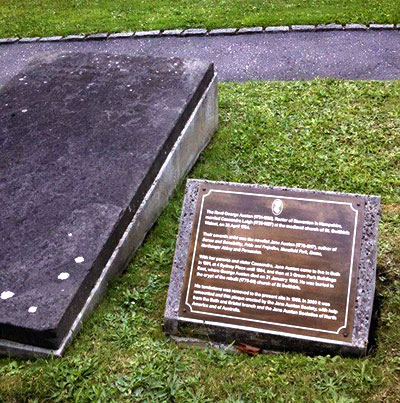 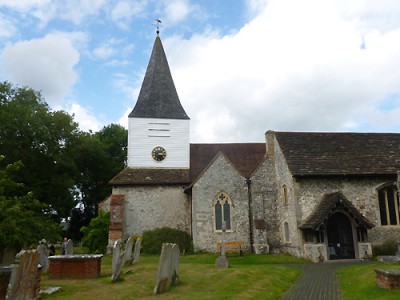 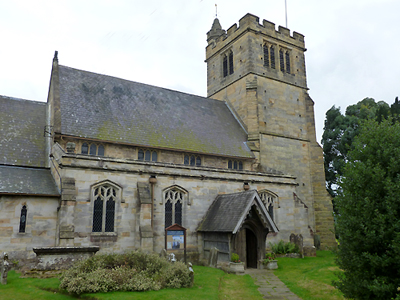 St. Margaret's Church is the final resting place of many of Jane Austen's forebears, including her great grandfather John Austen (1560-1620). The church has an Austen window and various railed tombs with the Austen crest. George Austen grew up in nearby Tonbridge, and Jane Austen worshipped here when visiting her Kentish relations. 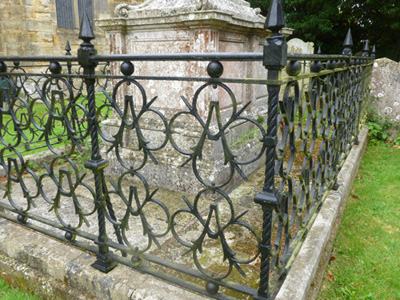 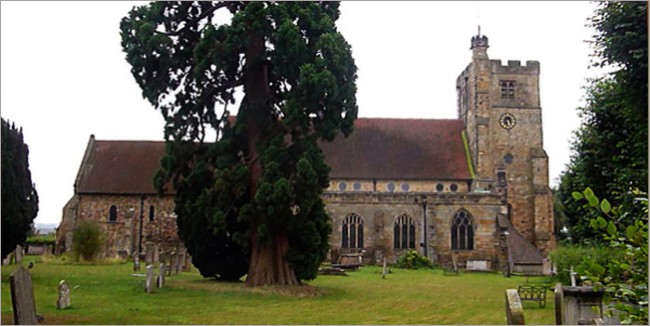 Jane Austen’s father, George, was born in Tonbridge, baptized in the parish church of St. Peter and St. Paul, and worshipped there as a youth while attending Tonbridge school and as an adult after returning from Oxford to be Usher of Tonbridge School.  Members of the family of Jane Austen's remarkable great-grandmother Elizabeth Weller are commemorated in the church, and her son William, Jane Austen's grandfather, is buried there with her grandmother, Rebecca. 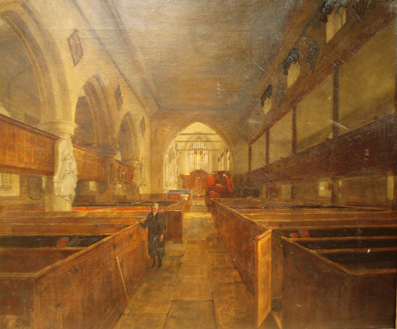 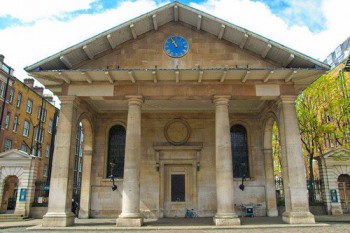 Jane and Cassandra Austen worshipped at this church when visiting their brother Henry in nearby Henrietta Street (1813-1814).  It is known as "The Actors’ Church" because of its long association with the West End theatrical community. 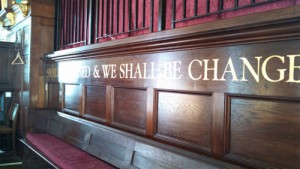 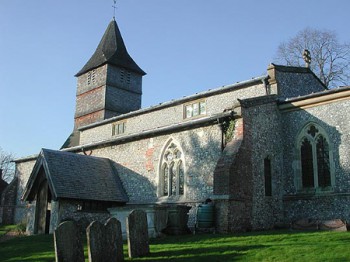 St. Peter's is near Ibthorpe House, where Jane Austen's friends Martha and Mary Lloyd lived with their widowed mother.  Austen was a frequent visitor and would have worshipped at this church while staying with them.  When Mary became the second wife of Austen's brother James in 1797, their marriage took place in St. Peter.

Although Stoneleigh Abbey is not a church, we include it here as a fine example of an estate chapel.  Jane Austen visited Stoneleigh Abbey in 1806 with her sister and mother.  The chapel is considered by many to be the inspiration for the chapel at Sotherton Court in Mansfield Park.

Church of St. Michael and All Angels, Hamstall Ridware, Staffordshire*

“One half of the world cannot understand the pleasures of the other.”