Miss Austen Regrets, the film biography shown on Masterpiece, was thoughtfully shaped by screenwriter Gwyneth Hughes, who explains her working method in this way:  "The script is very tightly based on Austen's surviving letters to her sister and to her young niece, Fanny.  So I must share the credit for quite a lot of the dialogue with Miss Austen herself!" 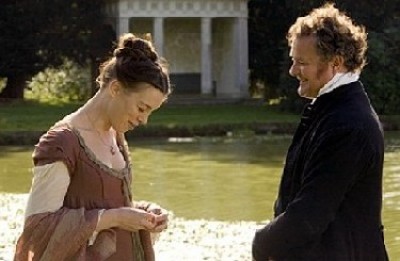 In the movie, 39-year-old Jane Austen is portrayed by Olivia Williams.  The Rev. Brook Edward Bridges (called Edward), played by Hugh Bonneville, is a central figure in the story.  He was the brother-in-law of Edward Austen, Jane Austen's brother, who had been adopted as a teenager by wealthy relatives, the Knights.  Austen's brother married Elizabeth Bridges in 1791, when Austen was 16 and Edward Bridges was 12.  Like other younger sons in the Bridges family, Edward became a clergyman, though his father was a baronet.

By the time Edward was 26, he was taking pains to recommend himself to Jane Austen.  In 1805 during a visit to Godmersham, Edward Austen's estate in Kent, Austen wrote to her sister Cassandra:  "[W]e could not begin dinner till six. We were agreeably surprised by Edward Bridges's company to it. . . . It is impossible to do justice to the hospitality of his attentions towards me; he made a point of ordering toasted cheese for supper entirely on my account" (27 August 1805).

A few years later Austen wrote to Cassandra from Godmersham:  "Lady Bridges looked very well, & would have been very agreeable, I am sure, had there been time enough for her to talk to me . . . . Her son Edward was also looking very well, & with manners as un-altered as hers" (30 June 1808).  A letter written later that year to Cassandra, who was visiting Godmersham, includes an important emphasis:  "I wish you may be able to accept Lady Bridges's invitation, though I could not her son Edward's; she is a nice Woman, & honours me by her remembrance" (7 October 1808).  Citing this letter, Deirdre Le Faye, in Jane Austen: A Family Record, says, "it seems possible that Edward Bridges proposed or attempted to propose to [Austen during her visit in 1808], . . . a proposal which she had no difficulty in politely rejecting."

While Cassandra was at Godmersham in 1808, she sent news that Edward Bridges had become engaged to Harriet Foote, his sister-in-law.  Austen expressed surprise and concern:

"Your news of Edw: Bridges was quite news . . . . I wish him happy with all my heart, & hope his choice may turn out according to his own expectations, & beyond those of his Family—And I dare say it will.  Marriage is a great Improver—& in a similar situation Harriet may be as amiable as Eleanor [Harriet's sister, first wife of Brook William Bridges].—As to Money, that will come You may be sure, because they cannot do without it.—When you see him again, pray give him our Congratulations & best wishes" (20 November 1808).

The letter ends, "Martha [Lloyd] sends her best Love, & thanks you for admitting her to the knowledge of the pros and cons about Harriet Foote."  The references to Harriet's personality flaws did not bode well for Edward.

Fast forward to the opening of Miss Austen Regrets, which is solidly based on events from 1813-1815 reported in Jane Austen's letters.  Just after she arrived at Godmersham for an extended stay in the fall of 1813, Austen wrote:

"[T]his morning we had Edwd Bridges unexpectedly to breakfast with us, in his way from Ramsgate [a seaside spa] where is his wife, to Lenham where is his Church—& tomorrow he dines & sleeps here on his return.—They have been all the summer at Ramsgate, for her health, she is a poor Honey—the sort of woman who gives me the idea of being determined never to be well—& who likes her spasms & nervousness & the consequence they give her, better than anything else" (25 September 1813).

Austen's astute understanding of Harriet Bridges is echoed in the characters of Mary Musgrove in Persuasion and Susan Parker in Sanditon.

During the same visit Austen wrote:  "We are certain of some visitors tomorrow; Edward Bridges comes for two nights in his way from Lenham to Ramsgate & brings a friend" (11 October 1813).  And a few days later:

"Edward Bridges & his friend did not forget to arrive.  The friend is a Mr Wigram . . . . The history of his coming here, is that intending to go from Ramsgate to Brighton, Edw: B. persuaded him to take Lenham in his way, which gave him the convenience of Mr W.'s gig & the comfort of not being alone there; but probably thinking a few days of Gm [Godmersham] would be the cheapest & pleasantest way of entertaining his friend & himself, offered a visit here, & here they stay till tomorrow" (14 October 1813).

Within two weeks Edward was back at Godmersham:  "We have had another of Edward Bridges' Sunday visits.—I think the pleasantest part of his married Life, must be the Dinners & Breakfasts & Luncheons & Billiards that he gets in this way at Gm.  Poor Wretch!  He is quite the Dregs of the Family as to Luck" (26 October 1813).

And at the end of Austen's stay, she reported:  "We are to have Edwd B. tomorrow, to pay us another Sunday's visit—the last, for more reasons than one; they all come home on the same day that we go" (6 November 1813).  This was probably the last time Jane Austen saw Edward Bridges.