The movie Miss Austen Regrets depicts a jealous Jane Austen silently fuming over the attentions paid by a young doctor to her 22-year-old niece, Fanny Knight. The doctor, Charles Thomas Haden, is portrayed by Jack Huston, with Olivia Williams as Jane and Imogen Poots as Fanny. Austen’s letters to her sister, Cassandra, written from London in the autumn of 1815 include many references to Haden but provide no support for the screenplay’s invention of a romantic triangle. On the contrary, they suggest that Austen enjoyed both Haden and his flirtation with Fanny. 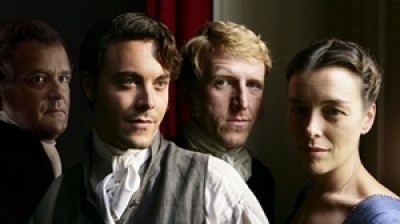 In October 1815 Jane Austen (then 39 years old) was staying with her brother Henry in London while they negotiated with John Murray for the publication of Emma. Henry became seriously ill, and Charles Haden, a 28-year-old surgeon and neighbor of Henry’s, was called in. Austen wrote to Cassandra (mistakenly identifying Haden as an apothecary): “Mr H. is the apothecary from the corner of Sloane St—successor to Mr Smith, a young Man said to be clever, & he is certainly very attentive & appears hitherto to have understood the complaint” (17 October 1815).

The Austens’ friendship with Haden grew over the next few months. In mid-November Fanny Knight came to stay with her aunt and uncle. Deirdre Le Faye, in Jane Austen: A Family Record, says that Fanny hired a harp and engaged a music master to instruct her. In the evenings Henry’s friends often visited. On November 24 Austen wrote to Cassandra, “Tomorrow Mr Haden is to dine with us.—There’s Happiness!—We really grow so fond of Mr Haden that I do not know what to expect.—He, & Mr Tilson & Mr Philips made up our circle of Wits last night; Fanny played, & he sat & listened & suggested improvements.” Later, in the same letter, Austen expressed disappointment on learning that two ladies had invited themselves to tea on the following day: “here is an end of our extreme felicity in our Dinner-Guest.—I am heartily sorry they are coming! It will be an Evening spoilt to Fanny & me.”

The evening, however, turned out better than anticipated.

“So much for the morning; then came the dinner & Mr Haden who brought good Manners & clever conversation;—from 7 to 8 the Harp;—at 8 Mrs L. & Miss E. arrived—& for the rest of the Evening the Drawing-room was thus arranged, on the Sopha-side the two Ladies Henry & myself making the best of it, on the opposite side Fanny & Mr Haden in two chairs (I beleive at least they had two chairs) talking together uninterruptedly.—Fancy the scene! And what is to be fancied next?—Why that Mr H. dines here again tomorrow. . . . Henry calls himself stronger every day & Mr H. keeps on approving his Pulse—which seems generally better than ever—but still they will not let him be well. . . . Perhaps when Fanny is gone, he will be allowed to recover faster” (26 November 1815).

Charles Haden became a close enough friend that he was admitted to the secret of Jane Austen’s authorship. She told Cassandra, “Mr H is reading Mansfield Park for the first time & prefers it to P&P” (26 November 1815). Perhaps Fanny Price was the inspiration for this playful remark reported by Austen in another letter: “I have been listening to dreadful Insanity.—It is Mr Haden’s firm beleif that a person not musical is fit for every sort of Wickedness” (24 November 1815).

When Henry was fully recovered, Austen wrote to Cassandra, correcting her mistake about Haden’s profession with an affectionate description:

“To make [Henry’s] return a complete Gala, Mr Haden was secured for dinner.—I need not say that our Evening was agreable.—But you seem to be under a mistake as to Mr H.—You call him an Apothecary; he is no Apothecary, he has never been an Apothecary, there is not an Apothecary in this Neighborhood—the only inconvenience of the situation perhaps, but so it is—we have not a medical Man within reach—he is a Haden, nothing but a Haden, a sort of wonderful nondescript Creature on two Legs, something between a Man & an Angel—but without the least spice of an Apothecary.—He is perhaps the only Person not an Apothecary hereabouts. He has never sung to us. He will not sing without a P. Forte accompaniment” (2 December 1815).

Fanny’s diary records another “delightful musical evening with Mr Haden” on December 4, after which Fanny returned to Godmersham.

As Austen prepared to leave London later that month, she sent Haden a note along with some books she had borrowed: “Dear Sir, We return these volumes with many Thanks. They have afforded us great amusement.—As we were out ourselves yesterday Evening we were glad to find you had not called—but shall depend upon your giving us some part of this Evening. I leave Town early on Saturday, & must say “Good bye” to you.—Your obliged & faithful J. Austen” (14 December 1815). On December 16, Austen’s fortieth birthday, she left London for the last time.

Charles Thomas Haden had a brief but distinguished medical career. He graduated as a surgeon from the University of Edinburgh and continued his studies in Paris with Laennec, inventor of the stethoscope. Among his accomplishments, Haden is credited with introducing the stethoscope to England and discovering that gout can be treated successfully with Colchicum autumnale, commonly known as autumn crocus, a treatment still used today. Haden’s progressive, prevention-oriented medical views advocated fresh air, exercise, and moderation of food and drink, rather than medicines, to cure skin disorders. He also wrote in support of female education: “If young women were educated more with a reference to health, and less to personal accomplishments and delicacy of appearance, the number of inefficient mothers would be reduced.” A collection of his writings was published in London in 1827 by Dr. Alcock, Practical Observations on the Management and Diseases of Children.

Haden married Emma Harrison, who was a singer and the daughter of a celebrated vocalist. Their son, Francis Seymour, born in 1818, became a well-known surgeon and distinguished artist. Haden died in 1824, his life cut short by lung disease.