Pen and Parsimony: Carriages in the Novels of Jane Austen, Part 1

Why does Jane Austen talk about carriages so often, and what is she trying to say? In this post, Sandy Lerner introduces her two-part video series, "Pen and Parsimony: Carriages in the Novels of Jane Austen." The short films translate the once-familiar language of carriages for modern readers. — Editor

Early in 1994, during a mid-life crisis that required me to take up the sport of jousting, I bought a pair of English Shire horses. Besotted with my horses, I bought a carriage. Driving it, I experienced a quite thrilling revelation concerning the inclusion of carriage-related terminology—nearly 400 times—in Jane Austen’s novels. I found myself tumbled Alice-like into a journey to Nounderland. There, all signs pointed to the language Austen deftly incised to convey intentional, pointed value judgments, balancing her characters along the various social dimensions of financial status, taste, and character, to name but a few. 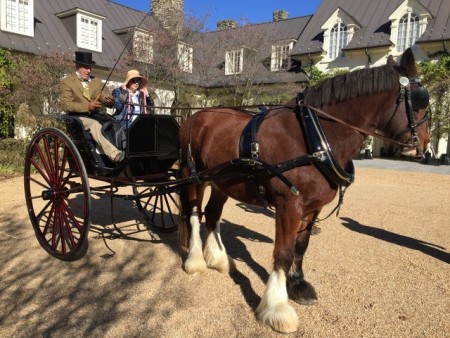 I acquired more carriages, an act which served to underscore my suspicion that the specificity of these terms must be intentional. I eventually proposed “Lerner’s Law of Austen”: whenever Austen uses a general noun, such as carriage, house, or dress, that’s what she’s talking about; when she uses a specific term, such as landaulet, pearls, or mince pies, she’s talking about something very different.

With this in mind, I produced two short video presentations for JASNA that help decode the social and economic implications of the various vehicles mentioned in Austen’s novels. This first video, created for the 2020 AGM, focuses on the carriages themselves. The second video, which will also be available soon, will show what it was like to ride in those carriages and why these messages are important in understanding the characters in the novels and Austen's commentary on them.

I hope you enjoy traveling on this tour of “Pen and Parsimony: Carriages in the Novels of Jane Austen.”

The video series "Pen and Parsimony: Carriages in the Novels of Jane Austen" is based on a breakout talk Sandy Lerner presented at the 1999 and 2013 AGMs. She has graciously provided her talk as a reference for those who would like more in-depth information. — Editor

Sandy Lerner, OBE, cofounded Cisco Systems in 1984, moved on to create the cosmetics company Urban Decay, and now owns and operates an organic farm. Her foundation acquired a 125-year lease on Chawton House, funded its restoration, and established Chawton House Library, a center for the study of women’s literature in English during the period 1600-1830. Lerner is the author of Second Impressions, a sequel to Pride and Prejudice, and Caticons: 4,000 Years of Art Imitating Cats, and has many other pursuits, including carriage-driving and jewelry-making. She has been driving carriages since 1994 and is a founding member of the Four-in-Hand Club of America.