What a Lady Might Carry in Her Reticule, Part 1: Calendars and Almanacs

We are excited to launch Austen's World Up Close, a new addition to our website that will feature short videos on various aspects of Jane Austen's world. Originally produced for our 2020 Virtual AGM, the videos are brief "classes" on Regency-era food, collectibles, games, needlework, and more. A new video will be released every few weeks with an introduction by the creator in our news center, The JASNA Post. Once they are released, you will also be able to find the videos by going straight to the Austen's World Up Close section of this site.

Our first release is Part 1 of the video series "Things That Might Be Kept in a Reticule" by Candice Hern. Ms Hern is a New York Times and USA Today bestselling author of historical romance novels set during the English Regency, and her award-winning website is often cited for its extensive Regency World pages.

What a Lady Might Carry in Her Reticule, Part 1

I’ve been collecting antiques for decades, many of them from the years during which Jane Austen lived. My home is filled with Georgian tables and chairs and tea-tables and desks. But many of my collections are what antique dealers call “smalls”—items that I can easily pack in a suitcase when returning from a trip to England without the bother and expense of shipping. I buy from dealers, here and in England, and more often from auctions. And yes, I find things on eBay from time to time. 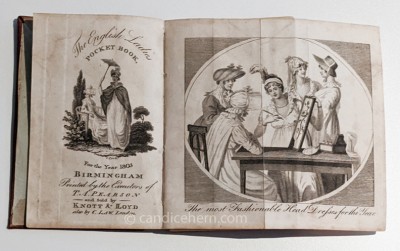 When JASNA asked me to put together short videos featuring items from my collections for the 2020 AGM, I decided to focus on items a lady might carry in her reticule, i.e., some of those “smalls.”

As you will hear in the first video, before there were reticules, ladies wore giant pockets under their wide 17th- and 18th-century skirts. Because the skirts were so huge, they could stuff pretty much anything in their pockets. But when the narrow skirts of the Regency became popular, bulky pockets were out of the question. So, the late 18th and early 19th centuries saw the development of purses held outside the skirts, i.e., the beginning of the modern-day purse. But what did these Regency ladies call them? The term reticule is not one that Jane Austen would likely have heard. The ladies’ magazines of the period, which I also collect, always use the term ridicule for the hand-held purse worn outside the skirt. French prints also use the term ridicule. After decades, even centuries, of hiding their belongings in big pockets under their skirts, perhaps some French wit decided it was simply ridiculous to see ladies carrying their personal items in full view of all the world, and named those purses ridicules. Who knows? But as we are all more accustomed to the term reticule, that is the term I use in my videos.

In Part 1, I will show you a couple of printed items that a lady might have carried: the Regency equivalent of a day-timer and a teeny-tiny almanack. Enjoy!

Editor's Note: Two more videos in this series will be available soon: Part 2 on Scents and Cosmetics and Part 3 on Coin Purses, Fans, and Vinaigrettes.