The Jane Austen Society of North America (JASNA) was founded 40 years ago, with an inaugural dinner on October 5, 1979. Since then, JASNA has become the largest literary society in the world devoted to Jane Austen. JASNA brings together thousands of members—Austen's enthusiastic readers and professional scholars alike—to promote the study and appreciation of her works, life, and genius.

From Idea to Reality

JASNA’s story begins in 1975, four years before its founding, when two of the three co-founders met and bonded over their common love of Jane Austen. In Hampshire, England, Joan Austen-Leigh, a Canadian playwright, novelist and great-great-grand-niece of Jane Austen, met J. David (Jack) Grey, a junior high school teacher and administrator from New York City. They were both members of the Jane Austen Society in Britain and were attending events in Chawton and Steventon celebrating the bicentennial of Jane Austen’s birth.

Figure 1. A Brief History of JASNA.
Click here to magnify the image.

Grey later wrote, “Oakley Hall, near Steventon, might be considered the birthplace of JASNA since it was there that Joan Austen-Leigh and yours truly met at the bicentenary ball in the summer of ’75."1 The Canadian and American became great friends and continued their acquaintance at Austen-related events and trans-continental visits over the next four years. Joan Austen-Leigh's husband, Denis Mason Hurley, encouraged them to form a North American Austen society to allow others to share the same camaraderie.

Plans fell into place in early 1979. Jack Grey wrote to Sir Hugh Smiley, then the Honorary Secretary of the Jane Austen Society in England, and requested a list of the organization’s members living in North America. Joan Austen-Leigh and Jack Grey also invited Henry Burke to join them as a third co-founder. A Baltimore accountant and attorney, Burke’s late wife, Alberta, had amassed one of the finest private collections of Austen letters, books, and ephemera in the world. Burke handled the legal work required to create the non-profit organization, The Jane Austen Society of North America, Inc.

Thanks to articles published in Persuasions by Jack Grey and Joan Austen-Leigh, as well as letters shared by Professor Joseph Wiesenfarth, one of the original patrons of JASNA, we can reconstruct the groundwork laid by the founders in 1979. 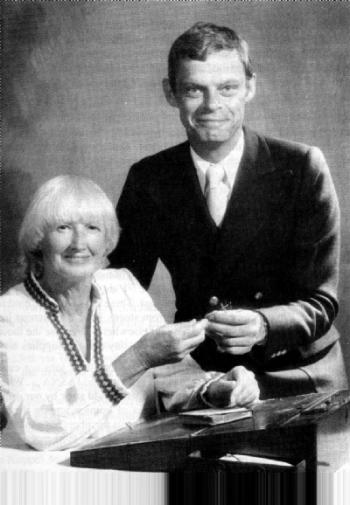 Joan Austen-Leigh and J. David Grey were photographed in preparation for the first meeting of JASNA. They are pictured with Jane Austen's writing desk and are holding her spectacles. (1979)

An Active and Welcoming Society

By October 1984, JASNA had more than tripled its ranks, to 1,320 members,5 and the number of Regions had increased from 9 to 23. Since then, JASNA membership has continued to grow, boosted at times by new film and TV adaptations of Austen's novels. At the end of 2018, JASNA had 79 Regions and more than 5,800 members, proving that the founders were correct: a Jane Austen Society “on this side of the Atlantic” would be well received.

Perhaps the key to JASNA’s success is that it welcomes everyone who is interested in Jane Austen. The Society is a “big tent,” where amateur Austen enthusiasts mingle with academics and scholars in a collegial atmosphere, bonding over their shared enjoyment of the author’s writing and genius. JASNA is also an active organization, thanks to the enthusiasm and skills of its many volunteers at the regional and national levels.

As JASNA turns 40, we honor the foresight and hard work of our founders, who took the leap and launched the Society. But we also owe a debt of gratitude to all of JASNA's officers and board members, regional coordinators, and members who have served at the national and regional levels during the last 40 years. Their leadership, dedication, creativity, and enthusiasm have made JASNA the vibrant and dynamic Society it is today.

We conclude this brief history of JASNA's founding with words from Joan Austen-Leigh, which continue to ring true:

“All our fears of the work any such society would entail were demonstrated many times over.  But then, wasn’t it worth it? . . . The pleasure it has brought, and the friends we made enriched our own and many other lives.”6

The information presented in this history of JASNA was drawn from articles in past issues of Persuasions, from the minutes of JASNA Board Meetings, and from letters shared by JASNA patron Dr. Joseph Wiesenfarth from his private collection. We invite you to read the articles listed below for even more historical details.